Designated as an area of Outstanding Natural Beauty, the ancient woodlands, magnificent coastlines and rolling heathlands of the New Forest make it immediately clear to see why this part of the world is considered to be so unique!

Initially declared as a 'royal hunting ground' by William the Conqueror in 1079, the luscious landscape of the New Forest was granted Special Protection, to ensure the abundance of wildlife remained plentiful for the King and his regal confidants. Luckily the harsh laws that were originally applied have meant that, even to this day, the 93,000+ acres of land within the New Forest's boundaries remain untouched and almost exactly as they were over 900 years ago.

It seems ironic that William the Conqueror ended up losing two of his sons, and a grandson, all whilst pursuing chase amongst these very woodlands that he treasured so. Perhaps the most tragic and renowned story being that of William Rufus's own death which still remains a mystery; whilst some believe it was his own hunting mishap, other records state that this unpopular heir actually died from the arrow of hunting companion Sir Walter Tyrell whereby his wayward weapon may, or may not have, missed a stag- fatally striking Rufus in his chest after bouncing from an oak tree. Visit the iron-clad commemorative stone in Lyndhurst to see what you think!

To help preserve the bounty of wildlife found here, 'Commoners' have been allocated ever since since medieval times. This tradition means that certain residents occupying land or property within the New Forest, are granted the right to graze their wildlife within the local woods, towns and villages. This tradition still allows around 6,000+ New Forest ponies, cattle, donkeys and even pigs, to roam freely around. As well as being a quintessentially charming part of the New Forest's heritage, this custom also helps to make sure gorse and bramble doesn't become overgrown, and potentially poisonous acorns are scoffed at pannage!

Ensuring this practice is all above board, Verderers (judges of the land) and Agisters (police of the land), still continue to meet up at least ten times a year at a court in Lyndhurst to oversee and manage the New Forest system.

Legends and tales from the forest

Throughout the centuries, the New Forest has been home to a range of celebrities, from the self-styled white witch, Sybil Leek, who resided in Burley, to 'Alice Hargreaves' - the little girl in Lyndhurst who was the inspiration behind Lewis Caroll's book, Alice in Wonderland!

Thankfully for the New Forest's current residents, one celeb, Brusher Mills, took the role of local snake catcher back in 1880, reportedly capturing thousands of serpents (mainly grass snakes but occasionally adders) with only a sack and forked stick at his side!

Selling his finds to London Zoo, to feed their birds of prey and their larger snakes, the story of Mills featured in a national newspaper article, making him somewhat of a celebrity! Visitors would travel to the New Forest just to seek out the famous snake catcher in order to have a photograph taken together. Taking advantage of his new-found status, Brusher would also take the opportunity to sell on ointments he hade made using snake remains, as well as the skeletons left over! You can find a marble headstone with a carving of him at work in Brockenhurst, and raise a toast to him at his favourite watering hole, also in Brockenhurst, aptly renamed The Snakecatcher! 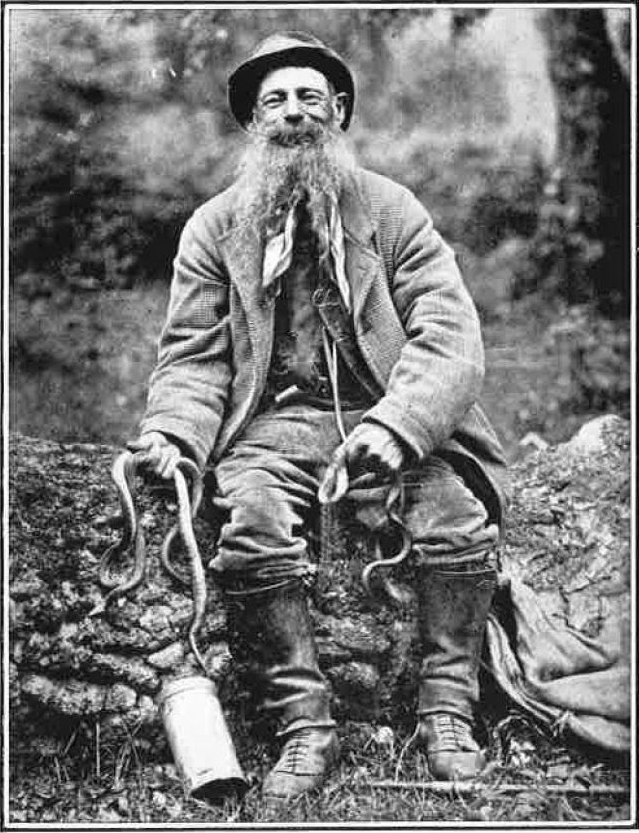 In addition to the copious woodlands found within the New Forest, the 20 miles of Solent water (separating the Isle of Wight from Mainland), Lymington River, Beaulieu River and Avon Water, each seamlessly blend country life with coastal living, helping to make the New Forest one of most exclusive places to live and to visit. With its array of pretty seaside towns, beautiful beaches and endless landscapes to explore, the New Forest was granted National Park status in 2004 to help conserve both the culture and the land.

From the moment you cross over the cattle grids and enter the New Forest step back in time and step into adventure!